Where Angels Prey is a compelling and disturbing story of greed and exploitation on a massive scale.

(New York-May 2015) The inescapable truth of most every society is that the lives of its citizens can often be told in terms of money, often with negative consequences for the poor. Where Angels Prey is a work of fiction by Ramesh S. Arunachalam that lays bare this unfortunate truth and its dire consequences in rural India. Arunachalam weaves a sometimes sordid tale chronicling the world of the micro finance industry in Andhra Pradesh, India circa 2010.

While the world was on the brink of financial collapse due to the American-initiated financial crisis, the business of writing and granting small loans to India’s billion plus poor (called the Micro Finance Industry) was exploding across the globe as investment firms clamored to become part of this unseemly financial investment oasis. Originally designed to help lift India’s poor out of poverty, The Micro Finance Industry began a rapid transformation from protector to predator almost overnight.

Arunachalam’s story begins as a humble pursuit by a journalist in search of a mundane beat assignment story and quickly opens upon an unexpected vista of usury, corruption, manipulation, malfeasance and the sickening exploitation of India’s poor on a massive and global scale.

Striking an uncanny balance of story-telling and factual relevance, Where Angels Prey uncovers predatory exploitation on such a massive scale, it is dizzying at times. In 2010 when customers of Micro Finance companies in India start committing suicide in alarming numbers, it becomes clear that the Micro Finance lenders have turned to ruthless tactics in their lending and collection practices.

With a primary focus on lending to women, the tale exposes a brutal cultural and gender bias that exists in India’s class hierarchy. Families pledging women and children as loan collateral and lenders taking unspeakable liberties with females who are unable to repay their debts, challenges the conscience and constitution when reading Angels.

All this against a background of systemic corruption and privileged ruling class sets the reader up for a climactic scene of a hard fall and justice finally being served. However, that satisfaction is not delivered and the outcome is nothing short of confounding.

A modern day version of Buck’s The Good Earth, Where Angels Prey is a haunting reminder of the dark side of money and capitalism.
Posted by Ramesh S Arunachalam at 1:24 PM No comments: 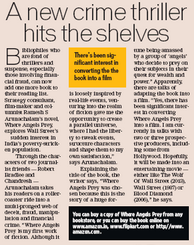 Click to Read Hindustan Times Chandigarh
Posted by Ramesh S Arunachalam at 10:35 AM No comments: 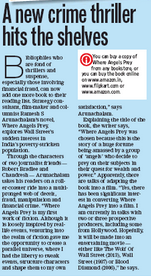 Posted by Ramesh S Arunachalam at 10:31 AM No comments: