Should not microfinance investment vehicles be judged by the same standards set for retail MFIs?

While much has been mentioned globally with regard to governance, systems, management and transparency for retail MFIs, the time has now come to apply the same yardsticks to MIVs and all other stakeholders who invest in microfinance


It was early the 1980s and I happened to have a fascinating meeting with a fine gentleman (a noted British academic and practitioner) in the development sector and he said a lot of things that have stayed in my memory and I relate one such statement here – ‘it is ironic that we sit from where we do and preach to others on what they should do at the grass-roots. And it becomes even more ironic when we do not practice what we preach’.

Viewed in this context, governance, systems, reporting and transparency are key words that I have heard a lot in the microfinance sector (from bi-lateral and multi-lateral donors, global funds, banks, investors and others) over the last two decades and especially, in the last few years. At many conferences, I have heard these (high and mighty) stakeholders literally ram these ideas into the heads of MFI practitioners. While much of this has been mentioned globally with reference to RETAIL micro-finance institutions (MFIs), I think that the time has now come to apply the same yardstick to Micro-Finance Investment Vehicles (MIVs)[i] and all other stakeholders who invest in micro-finance (be it multi-laterals, bi-laterals or others).

Without question, MIVs and other investors must subject themselves to the same scrutiny and standards that they expect of retail MFIs that they invest in. And you will appreciate this fact more when you read Hugh Sinclair’s recent book, “Confessions of A Microfinance Heretic: How Microlending Lost Its Way And Betrayed the Poor”

Sinclair essentially talks about the case of a few MIVs and other stakeholders who invested in LAPO despite knowing LAPO’s serious limitations (Please see previous Moneylife article Why blame the MFIs alone?). Indeed, MIVs and global banks have a lot of explaining to do with regard to why they invested in LAPO (in the first place) despite public domain material that pointed to serious weaknesses in the investee: a) illegal collection of savings; b) inordinately high interest rates; c) an illegal loan product (perhaps) because illegal savings collection was a part of it; d) conflict of interest in terms of the auditor being related to the CEO and other such issues; e) high levels of client desertion; f) lack of transparency with regard to data (which led to MicroRate’s subsequent withdrawal of its rating)  ; and g) poor governance among other things.

Without any doubt, the sanctity of these MIVs investing in LAPO can indeed be questioned on the basis of evidence available in the public domain. That said, I am however unable to accept Sinclair’s (implied conspiracy) argument that the investors (some MIVs and banks) did this on purpose as there is no serious evidence in the book that permits me to come to such a conclusion independently. I would certainly prefer to give these MIVs and banks the benefit of the doubt. Perhaps, sloppy due diligence (including inadequate scanning/reading of publicly available material) and/or short cuts adopted (cut paste presentation of credit proposals to different investors) may have resulted in this failure caused primarily by lack of appropriate systems, governance and management. And to be fair to these 1st round investors, many of them pulled out after the lid was blown on LAPO (and its illegal operations/other weaknesses) - which is perhaps a tacit acknowledgement by them of their mistake and/or error of judgment in the first place. However, the later (round) investors in LAPO – like responsAbility and Blue Orchard – still have a lot of explaining to do indeed.

That said, there is a larger point that I get from Sinclair’s book. It is the fact that even large and LuxFLAG labeled MIVs (emphasis added) like responsAbility invested in LAPO when a lot of this information was available in the public domain. Please see investments by responsAbility in LAPO as per timelines given below:

Perhaps there were more investments by responsAbility but I have no idea as data is scarce. The Planet Finance rating report (2011) says that the “Main international funders include responsAbility (transaction advised/organized by PlaNis[ii] –15% of total funding), Blue Orchard (7.5%), and Microcredit Enterprise (4%).”(Lift Above Poverty Organization (LAPO) Rating Report by Planet Rating, February 2011, Page No.5)

The key question here is how did responsAbility and Blue Orchard make this investment decision when public domain material on LAPO - being involved with illegal intermediation of client savings and having several other serious weaknesses - existed at the same time? Why did these funds invest in LAPO when others MIVs and stakeholders were pulling out? And how were the interests of primary investors in responsAbility and/or Blue Orchard safeguarded?

One may argue that responsAbility is LuxFLAG labeled but that hardly provides any comfort as when I tried to get to LuxFLAG (http://www.luxflag.org/) and look at if any documents of responsAbility were available, I found none for the specific period (when the investment in LAPO was made). So much for the labeling and associated comfort that it is said to provide with regard to MIV operations. Please see Exhibit # 1 below that provides tangible evidence in this regard and I have print screens with regard to the non-availability of all these specified reports given in the Exhibit. 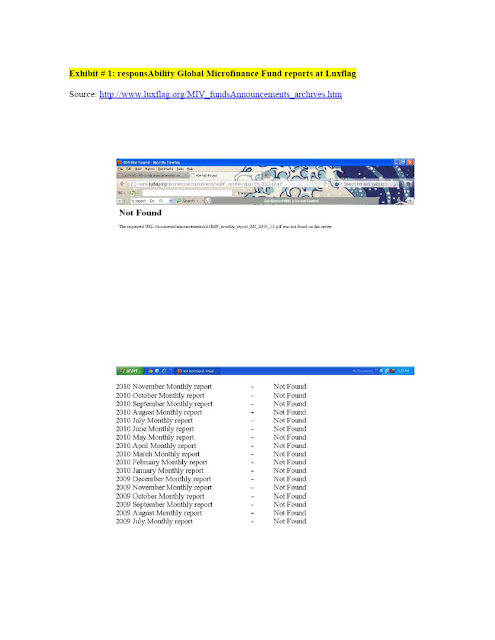 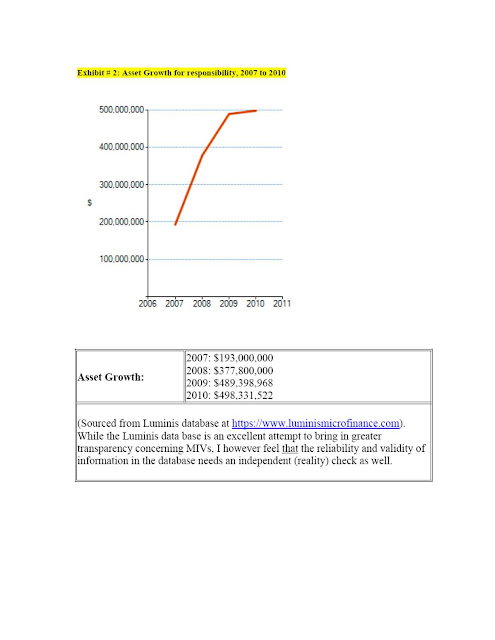 Much of the same argument goes for the Dexia Micro-Credit Fund (Blue Orchard Finance) which is another large LuxFlag labeled MIV. Apart LAPO, Blue Orchard invested in MFIs like Sahayata Micro-Finance in India, whose operations did come under a cloud, especially after the 2010 Indian micro-finance crisis. Please see previous Moneylife articles in this regard (i) Award winning Sahayata Microfinance is the latest to go astray; and (ii) What is said at conferences is very different from what is implemented in practice


Blue Orchard’s other investments in India are also of questionable nature, became they were made in MFI(s) that were directly linked to the irresponsible and phenomenally high (portfolio) growth that caused the 2010 Andhra Pradesh (AP) micro-finance crisis in the first place. Therefore, it appears that investments decisions of MIVs (like responsAbility and Blue Orchard) need not necessarily be aligned to grass-root reality.

That is a very critical point that needs emphasis and it certainly deserves attention of key stakeholders in the global micro-finance value chain – so that MIVs acquire the governance, systems and management necessary to invest appropriately and thereby protect their primary investors. Some may argue that LuxFlag’s attempt to certify MIVs is a step in that direction. Probably yes but a lot more needs to happen on the ground. And indeed, if the LuxFLAG label is to be taken more seriously, we also need transparent and accountable information with regard to the entire process of certification – so that we can judge for ourselves the quality of due diligence applied prior to certification, information so collected and so on.

Friends, in short, for me, Hugh Sinclair’s book was indeed a revelation about how MIVs operate in the international supply chain of delivering financial services to low income people. And after reading the book, I am searching for answers to questions such as (but not limited to) the following:

a)      How do MIVs make investment decisions? What systems do they have to ensure that the pressure to lend/invest does NOT result in poor investment? Should not MIVs have minimum governance standards and internal audit requirements just as RETAIL MFIs do? (Please see previous Moneylife articles (i) How to make the boards of large NBFC MFIs implement corporate governance norms in practice? (Part I); (ii) Corporate governance: What boards of large NBFC MFIs can do on the ground? (Part II) and (iii) Independent internal audit is the key to implementing responsible microfinance in MFIs)

b)      How do MIVs protect the overall interest of their primary investors? What systems do they have to ensure this in real time? What else may be necessary given the experiences narrated in the LAPO case?

c)      What standards of governance, transparency and reporting are MIVs currently subject to? Who sets these standards and who enforces them? How adequate are these?

d)      Given the huge diversity in legal form, location (place of incorporation), products, what can be said about the regulation and supervision of MIVs in an overall sense? And specifically, who regulates these MIVs? Who supervises them? What is the role of central banks in all of this? And does this regulation/supervision afford any protection to the primary investors in these MIVs?

e)      Last but not the least comes the question of whether (or not) there is any regulatory arbitrage? That is a very key issue indeed and will be dealt with in a separate article.

I do hope that bodies (like CGAP) in the global micro-finance industry play a constructive role in looking at issues such as the above and facilitating the necessary changes on the ground. And if that happens, I am sure that Hugh Sinclair’s book would have made a significant difference to the practice of micro-finance globally…
[i] “MIVs, also known as microfinance funds, are entities that invest in MFIs. For a fund to qualify as an MIV, it must meet the following criteria: (i) The investment vehicle must be an independent legal entity (i.e. independent of the MFI being funded); (ii) Multiple private investors must be present, or the vehicle must be open to such investors; and (iii) The investment vehicle must focus on investing in microfinance” (Source: http://www.microrate.com/)
[ii] Disclosure statement: PlaNis and Planet Rating are two distinct legal entities, operating in a strictly independent manner. Planet Rating does not disclose to PlaNet Finance any information that is not publicly available to all other investors or fund providers. Planet Rating’s internal Rating Committee is fully independent, private, and confidential.
Posted by Ramesh S Arunachalam at 7:03 PM