Rural Finance Practitioner
‘The first micro-pension scheme with UTI AMC as the fund manager was launched nearly in 2005. UTI AMC has since forged partnerships with several intermediaries/third parties: SEWA (Self Employed Women’s Association), a micro finance institution based in Ahmedabad; COMPFED, a federation formed by milk producers in Bihar; Paradip Port Trust; and an urban cooperative bank run by women’.[1] Other partnerships of UTI include SHEPHERD in Trichy, which the then Hon Finance Minister inaugurated
‘The key characteristics of the UTI AMC micro-pension scheme, whose process is given in Figure 1, are:
a)      ‘Contribution of small sum ranging from Rs.50 to Rs.200 per month;
b)     Flexibility in payments (monthly or yearly contributions are not mandatory), and
c)      Presence of a neutral third party, like an MFI, NGO, Cooperative, Self help groups (SHG) or an NGO, whose typical roles are described in box 1’[2]

Box 1: The Role of Third Parties in UTI Micro-Pensions

The third party like an MFI or NGO performs several roles. First, they are aggregators for generating a large number of pension fund members with common characteristics; Second, they undertake several administrative roles; and Third, they act as conduits for free flow of communication, between pension fund and members. Third parties typically help in reducing transactions costs by identifying (captive market) members, collecting contributions, and record-keeping. It imperative therefore that the third party enjoy the strong trust and confidence of members as well as be competent in administration and financial matters - both of these need to be maintained or enhanced over the long term. Increasing supply of effective and efficient third parties is therefore critical to expanding the reach of micro-pensions[3] ’
Currently, while the UTI AMC micro-pension scheme has been operational for some time, feedback is being sought by the intermediaries and hopefully, it will feedback into product and process design. 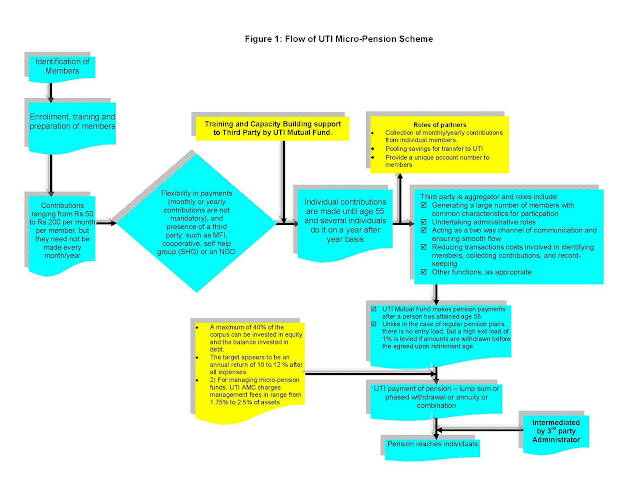 Email ThisBlogThis!Share to TwitterShare to FacebookShare to Pinterest
Labels: Micro-Pensions