Can We Bring Back Ayesha’s Ammy?

Locating the Nabee Saab household in Kurnool[i] is not difficult as it is near the Kabrasthan, the Muslim grave yard. And ‘Ayesha’, a 3 year old constantly crying for her Ammy, cannot go unnoticed, even as one enters the Nabee Saab house – a thin roofed structure, built on about 60 Sq ft of land. Standing outside the house is a 45-year-old person - who later turned out to be Nabee Saab - holding a sweet looking girl (about 3 years old). The tiny house, which is built of mud walls and some stone, has just 2 rooms – one where the entire family of 4 people (earlier 6 people) sleeps, lives and eats and another where the cooking is done and items are stored. There is a toilet outside.
The size of the house becomes more telling with the small girl’s constant crying for her mother Zaheera Bhee, who apparently committed suicide on 13/09/2010, as she was unable to make the repayments for the various loans she had taken. At least that is the cause provided by the family survivors…
It is in the above back drop that, Khaza (20), the eldest son of Zaheera Bhee and a painter by profession, narrated the pathetic heart rendering story…with some inputs from his father, Nabee Saheb.
Nabee Saheb, who is the head of this household, is a tailor and he has no stable income. He works in a tailoring unit nearby and payment of money for his work is based on the ability of the unit’s owner to procure work locally. As Nabee Saheb mentions, “By and large, I make around Rs 3000 to Rs 4000 a month (between Rs 750 to Rs 1000 per week and Rs 900 is common) but that is not assured as most of the young people are buying ready made garments these days. During festival seasons the unit gets orders from older people and in those months (which are not many in number), I would surely make Rs 4000 per month. In the lean months, I sometimes even get just Rs 2000 per month.”
Khaza adds, “I came back from Hyderabad become my mother and father wanted me to come and help out at home. My mother, Zaheera Bhee, used to do odd jobs in the town (like at the markets) and again, she did not have regular employment. So, my coming back helped as I was able to find work as a painter for 6 days in a week and bring home Rs 1200. However, this was not at all sufficient then because there were three other children to cloth and feed - Parveen (18) married and now gone with her husband, Muzambil (10) and Ayesha (3) – as well as several loan repayments to be made, day after day for weeks”.
Nabee Saheb reinforces this and argues that among the children, only Khaza has been able to support the family and his painting work fetches him Rs 1200 a week; he is also quick to add that Khaza can find work almost every week – and says that Khaza’s income is the most regular within the family - by the grace of God. Please see Table 1 hereafter for a summary of sources provided by the family 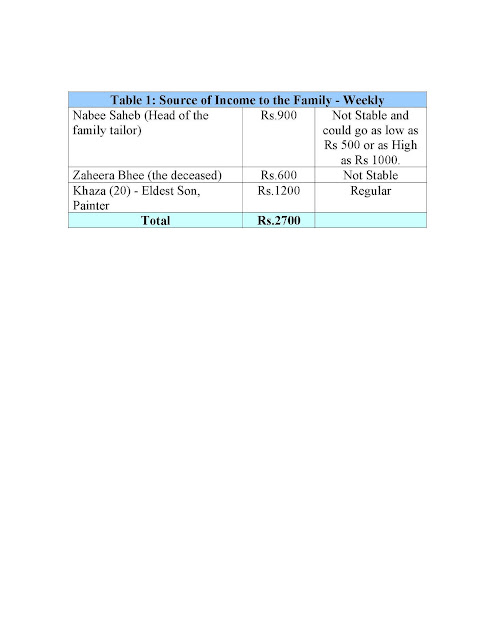 According to Khaza, his mother, Zaheera Bhee became a member of a women’s group in the neighbourhood and it was a five member group (what we call as a JLG in micro-finance parlance). The main (supposed) purpose of his mother (Zaheera Bhee) joining this group was to access a loan from the MFI for doing some business and meeting cash flow requirements but setting up of the business never really happened. Khaza further adds, “To my family’s surprise, we found that the group was a willing and easy source of loan money – even as the local money lender would hesitate to give us more money.” Thus, Zaheera Bhee along with her group members started taking loans for various purposes and there were no serious questions asked about the purpose of the loans and the family naturally felt happy all the while, taking and using the loans.  The details of the various loans taken by Zaheera Bhee[ii] are given below in Table 2 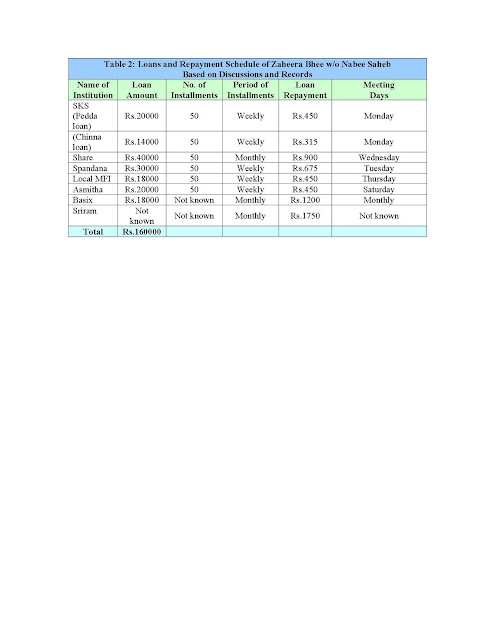 While Khaza claimed that the family spent the money (from various loans) for regular consumption purposes, Nabee Saab quickly added that a significant portion was also used for his daughter, Parveen’s, Nikha (wedding)! This apart, Khaza also clarified that any surplus loan money was kept safe and used for (any) unforeseen emergencies as well as repaying (if required) MFI loan installments that fell on successive days every week.
According to the family, there were quick or notional meetings on almost every day of the week for different MFIs. For example, Monday was the day of the meeting for SKS (Pedda and Chinna Loan), while Tuesday was for Spandana Spoorty MFI, Wednesday for Share, Thursday for one local MFI, Saturday for Asmitha and a day each in a month for Basix and Sriram. The meetings were to ensure that the member who borrowed, remitted the money to the group/centre leader/agent every week
Both Khaza and his father emphasize the fact that it has indeed been difficult to survive and pay the loan. They said that the strategies used by the family to repay include: a) Borrowing from another MFI or such source; and b) Borrowing from money lenders, even for 1 or 2 installments. Khaza further said that “it is only when my mother, Zaheera Bee, ran out of options that she committed suicide.” Now, he says that, “My father and I are also in a similar situation and do not know what to do, as we have no source to repay the loan”. With a weekly income in the range of Rs 2700, the repayment situation has always been a very critical one for the family, as Figure 1 below explains. As you can see from figure 1 below, with each successive loan, the family’s repayment pressure was building…and building up… 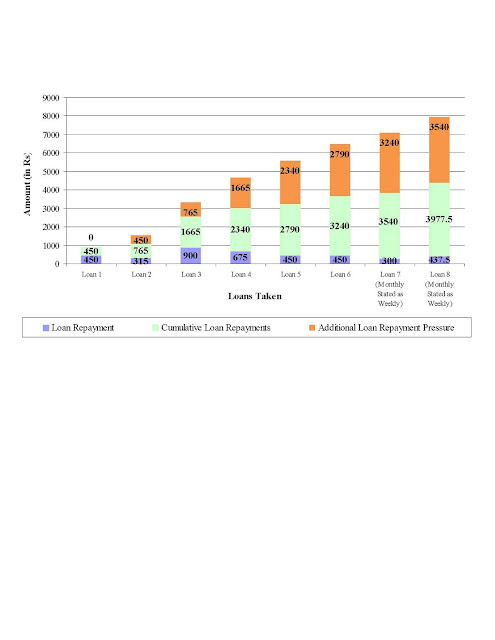 Now after the death of Zahera Bhee, the repayment pressure has increased as they have lost Rs 600 worth weekly income that was contributed by the deceased mother.
The family was rather unclear on the actual interest paid and they could at best, talk about the total repayment and hence, the bifurcation has not been done. 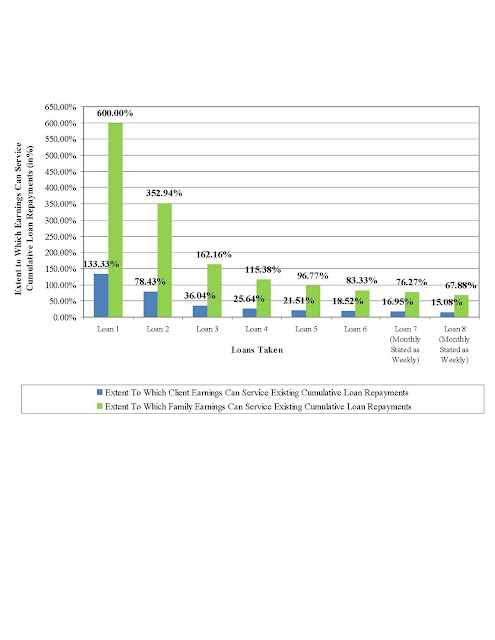 And as figure 2 above suggests, Zaheera Bee’s earnings were hardly enough to service the loans after the 2nd loan was taken. Even when the entire family’s earnings are taken into account (Rs 2700), servicing the cumulative loan repayments after the fifth loan leaves the family in a deficit situation.
Add to this the fact that the family of 6 had eating, living, clothing and educational expenses for the children – you can clearly see it is a no win situation and one really questions the basis on which several loans were given in the first place. That is the most critical issue, which needs to be explored and understood by the RBI sub-committee.
Further, as evident from figure 3 below, the family enters a deficit situation from the 5th loan repayment starts, when all family earnings are taken into account. When just Zahera Bee’s earnings are considered, then the deficit starts with the repayment of the 2nd loan. 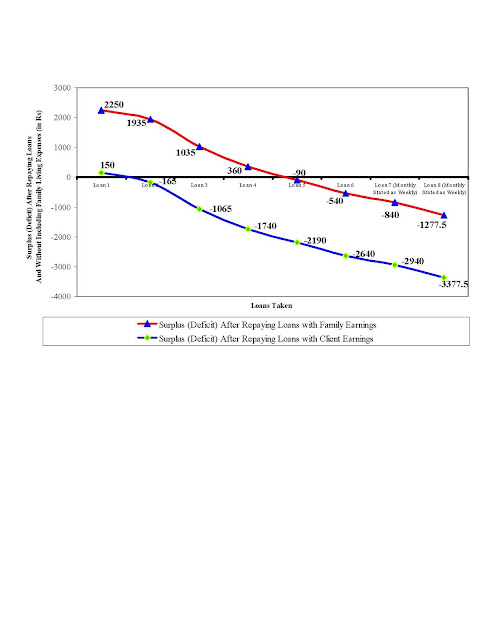 [i] Exact place of residence has been withheld at request of client family, for security reasons. The case study has been videotaped…and the protocols are available
[ii] The family claimed that money lender loans were usually settled quickly as they had a very high rate of interest and also because they were usually small {often borrowed for paying small (MFI) loan instalments}.  We probed further but we could not get complete details on all informal loans taken by Zahera Bee and her family and their status, as there were no records what-so-ever. Khaza also said that his mother was the one who borrowed and therefore, they were unable to provide the specific details. It is however possible that the family also had some informal loans.


[iii] The RBI must look into and ascertain the facts from similar and other case studies – this case study is merely an attempt to highlight key issues and what has been said here is a faithful report of what the family stated to us. As such, the case study is a report of what the aggrieved family told us and must be taken as such. We have refrained from making any serious inferences on the case study thus far…. We also state that we do not attribute to any connection between the suicide and the MFI loans and what we have done is to merely report what the family said…
[iv] It would be very useful for the RBI sub-committee to look into the spread of this phenomenon and provide some estimates of its real extent, through appropriate sampling.
[v] Same as iv above
Posted by Ramesh S Arunachalam at 8:41 AM