Indian Micro-Finance: Time for RBI to Get the (Legal) Framework Right! 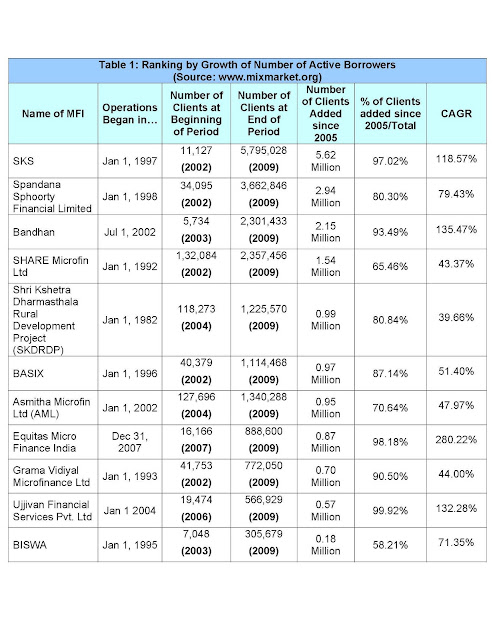 Inappropriate Client Targeting and Multiple Lending: A second issue, according to Mr Ramakrishna, is that “while the size of portfolio has increased manifold, the methodology for targeting the right clients to meet appropriate credit needs has not evolved over a period of time proportionate to the size of portfolio. Hence, field staff are forced to disburse left, right and centre and many times in competition with several other MFIs in the area. This led to inappropriate targeting and multiple lending. The situation in Coastal Andhra is even worse. According to the regional coordinators of some MFIs, some of the households are managing 8-10 different loans including bank linkage and size of the loan is between 200,000 to 250,000.”
Thus, multiple lending has become the bane of the micro-finance industry, and it is rampant as MFIs are disbursing the credit, without weighing the livelihood opportunities available to the clients. And as Mr Neelaiah, a senior micro-finance grass-roots practitioner argues, “MFIs need to gauge the client’s absorption capacity and their ability to manage the portfolio.” Without doubt, the ability of poor clients to repay between Rs 3000 – Rs 4500 every week, is rather impossible, without borrowing from other sources (and perhaps at higher rates of interest). At some level, the cycle overturns and causes a crisis as is the case now…”
Prof Rajalaxmi Kamath and Prof Srinivasan[vi] (2009) support the above and conclude that, “The existence of multiple borrowing among the MFI clients implies that repayment, to a greater or lesser extent, is dependent on the borrower’s ability to raise a new loan to repay a prior borrowing. At a macro-level the consequence is that the total outstanding to the financial system is higher than if a single “right-size” loan was provided. This “additional loan” covers two amounts. The first is the enhanced transaction cost the borrower faces, as a consequence of multiple (rather than a single) loan. The second is a potential “delinquent” amount. The portfolio-at-risk is effectively financed by the financial system and is masked. This is like a game of musical chairs, with multiple sources of financing the music stops rarely. When (we are not using the more optimistic ‘if’) the music does stop, the accumulated delinquency will suddenly show up. Again, taking recourse to finance vocabulary, the delinquency has been securitized and funds raised against it.”
As shown in box below, studies by EDA Rural Systems and others also support the above findings and reinforce the fact that multiple borrowings exist in micro-finance. There is an added dimension here – as mentioned by several industry experts and corroborated by a recent study in Andhra Pradesh by APMAS, a majority of the MFIs have effective interest rates in range of 25 - 40%, including charges levied on compulsory insurance etc.

ð  The State of the Sector Report, 2008, estimated “multiple borrowing to be prevalent in 10% to 20% of MFI clients”.[vii]
ð  In the famous Kolar micro-finance crisis in 2009, “micro-finance clients were likely to have an average of three loans each. Client information from seven of the 9 MFIs operating in the town shows that at least 33% of them have more than one loan and around 20% have three or more loans”.[viii]
ð  In a study conducted at Ramanagaram[ix] for three months, it was found that “19 of the 20 households involved in the study were indebted to more than 2 MFIs/SHGs; 10 households to more than 4 MFIs/SHGs; and 2 households to a total of 7 MFIs”.
Therefore, given the above issues of rapid growth, inappropriate products and multiple lending, there are several questions that need to be focussed on by the RBI sub-committee:
a)   Is it natural and/or healthy for MFIs to grow at the pace that they have grown? How have these MFIs been able to grow so rapidly, especially since 2005? What changes were made to their model which enabled growth at such a scorching pace since 2005? What was the role played by the bankers/lenders/investors in this very rapid growth?
b)   What can be said with regard to the capacities and systems of MFIs to manage this growth? What is the state of human resource management systems in MFIs and how much is this to blame for the present day crisis? How can staff working conditions be bettered? How can staff be made more sensitive and accountable to the above concerns and issues?
c)   Given that the financial statements of some of the top MFIs themselves admit the presence of frauds including non-existent borrowers, what can be said with regard to overall assets of MFIs (and their actual quality), acquired through such (burgeoning) growth?
d)   How widespread is the phenomenon of non-existent clients? How commonplace is multiple lending? What are the implications for priority sector lending?
e)   Given that most bank loans to MFIs are public deposits, should the banks have been more careful?  What does this whole phenomenon say about the current due diligence process at banks? Are banks cutting corners as far as procedures are concerned? Is there good enough reason to believe that loans were “pushed’’ to MFIs as well as the poor women, resulting in the situation today? What is role and responsibility of Bank and MFI staff/management in this regard?
f)    Given that the MF clients have multiple loans and given that the effective interest rates are in the range of 25 – 40%, can these clients afford to pay such interest, especially for multiple loans, especially, in the wake of their livelihood situations?
Corporate Governance in Indian MFIs: A further aspect that requires the close attention of the RBI sub-committee pertains to corporate governance practices in Indian MFIs - which has indeed left a lot to be desired, especially from events in the 2010 in the Indian micro-finance industry, both prior and after the SKS IPO.  This fact assumes greater importance given that India’s MF landscape is largely dominated by promoter-owned/controlled MFIs that have distinct characteristics: (1) Inadequate checks and balance over executive decision making and behaviour; (2) Lack of truly independent board nomination sub-committees; (3) Insufficient transparency about ownership/control, related-party transactions and the (group’s) overall financial position; (4) Promoters’ friends/families often leverage themselves highly to acquire stake in order to maintain control over the MFIs; (5) Conflicts of interest at various levels including board and senior management level; and (6) Lack of transparent reporting to the outside world. The RBI sub-committee would do a great service to the micro-finance industry and the NBFC MFIs, if it were to recommend mechanisms to overcome some of the above limitations and set corporate governance standards for NBFC MFIs to follow
To summarise, micro-finance, which started as an informal and local sector, is now in the process of transforming to a full-fledged industry, with significant capital market participation and global integration. Clearly, micro-finance is at crossroads and any attempt to develop it further must also be accompanied by a commensurate effort to establish fair rules of the game (regulation) and enable compliance to these rules (supervision) on the part of various stakeholders. The RBI sub-committee therefore needs to objectively assess this complex situation and evolve pragmatic solutions that would result not only in effective regulation and supervision but also contribute to building a vibrant, healthy and competitive micro-finance sector with sufficient choices for the poor and appropriate safe guards against potential institution failures. And for that, the RBI committee needs to answer specific questions such as those given above, which are in the best interests of depositors and the Indian public …