The Emergency (Liquidity Bailout) Fund for The Indian Micro-Finance Industry: A Great Chance for The RBI to Take CONTROL!!!

Ramesh S Arunachalam
Rural Finance Practitioner
I came across a recent MEDIA report, which said that MFIN is trying to get emergency funding for MFIs from commercial banks and SIDBI and has requested RBI to approve the same and direct the banks/SIDBI to set up such a fund. This is a great opportunity for The RBI to take direct charge of the Indian Micro-Finance Industry
Industry Level Emergency Fund: At the outset, I would like to make it absolutely clear that, any such proposal for a LIFELINE LIQUIDITY FUND must be for the micro-finance industry as a whole and not exclusively for members of MFIN[i] or Sa-Dhan or INAFI or any other association. I hope the RBI recognises the same and utilizes this unique opportunity to build an industry level EMERGENCY FUND that can ease liquidity! That is critical and this is the right time for RBI to intervene
Fund Administration: That said, such a fund should however be (properly) administered by a special multi-stakeholder committee with representation of DFIs (SIDBI, NABARD), commercial banks (Public and Private Sector), other financial intermediaries who lend to MFIs (including private wholesalers like Ananya Finance), MFI associations (MFIN, Sa-Dhan, INAFI, Access Network etc), rating agencies (CRISIL, M-CRIL, APMAS etc) and other stakeholders as appropriate. NABARD and those commercial banks which have not lent significantly to MFIs, should be mandatorily invited to participate this fund – because commercial banks that have already lent to the MFIs may (but not always necessarily) have a conflict of interest, in terms of wanting to provide greater support for the MFIs that are their partners.
Ideally speaking, to be a fair and neutral, such a fund should be headed by an officer not less than the rank of an Executive Director (or at least Chief General Manager) of the RBI and have participation of SIDBI, NABARD, commercial banks (including those that have not lent significantly to the MFIs), MFIN, Sa-Dhan, other stakeholders as mentioned above and some members of civil society, as may be appropriate.
Housing of the Fund: Locating the fund with an MFI association like MFIN may not be appropriate because despite being well-intentioned and trying to take appropriate steps for handling the MFI crises (of today and the past), MFIN, Sa-Dhan or any other MFI association (for that matter) have not been able to enforce their codes of conduct on the ground. Clearly as Daniel Rozas and Sanjay Sinha write in their excellent article, self regulation (and by similar argument, perhaps self administration of any such emergency fund meant to mitigate the MFI liquidity crisis today) is not the answer, especially given the problems in the Indian micro-finance industry. Read on...

“Unfortunately, old habits die hard. …we are somewhat concerned about the long-term viability of the framework that is being set up.  Self-regulation is notoriously difficult and fickle.  Current market conditions certainly create incentives for leading MFIs to comply with MFIN’s standards, but situations change quickly and memories fade fast, while the business imperatives to maintain or grow market share never let up. …
How will MFIN monitor its members?  What enforcement mechanisms will it have to insure adherence, and will these include exposing offenders – a threat that is essential for compliance?  And what happens when outside actors, not bound by its rules, begin to chomp at MFIN members’ market shares?  It may seem an unreasonable concern, as MFIN currently represents the overwhelming majority of the microfinance market in India, but that may not be the case for very long.   Let’s remember that it was the growing market share of new actors in the US mortgage market – Bear Stearns, Lehman Brothers and others – that undermined long-established industry underwriting practices, causing a downward market shift that helped feed the housing bubble. …
These are questions not unique to MFIN, but that apply to any self-regulatory body where the nature of regulation comes into direct conflict with near-term business imperatives.  As a rule, such structures can easily lose their teeth once clearly visible risks sink back under the surface.  Moreover, what makes MFIN’s work particularly difficult is that its present objective – to prevent overlending – is a long-term one.  Much like the assets and liabilities of MFIs, the impetus and purpose of self-regulation must also be matched; otherwise enforcement can prove especially difficult. …That is the reason why most financial regulation is after all done by government.”
And if you look at the data for growth of active borrowers in India (using published mix market information), it is clear that much of the rapid growth that has occurred in Indian micro-finance has been because of the for-profit MFIs, most of whom are MFIN’s members. While I hope to be posting exclusively on this at a later date, a quick look at the data suggests the following:
First, NBFCs (all of whom are MFIN’s members) are Responsible for the Burgeoning Growth in Indian Micro-Finance After 2005: Among the top 14 Indian MFIs ranked in terms of the number of clients (in million) added after 2005 (and until 2009), there are 13 NBFC MFIs and just 1 non-NBFC MFI. Together, the 13 NBFCs have added 17.16 million clients after 2005 (until 2009) and this constitutes almost 94.54% of the total clients added after 2005 by these top 14 Indian MFIs.
Second, More Than 2/3rds of This Rapid Growth Has Come From AP Headquartered NBFC MFIs (all of whom are MFIN’s members): Further, in this group of 13 NBFCs, there are 6 MFIs with AP headquarters and they have added as much as 12.20 million clients in the same period. They AP Headquartered MFIs and their details is given below along with the national ranking (in terms of clients added after 2005 and until 2009):
Third, the AP Headquartered NBFC MFIs (all of whom are MFIN members) Grew Very Rapidly for Period 2007 – 2009: As the following data would suggest, the aforementioned AP headquartered MFIs have grown at a scorching pace during the period 2007 – 2009:
The following table and graph (using Mix Market data) should serve to illustrate the various above points: 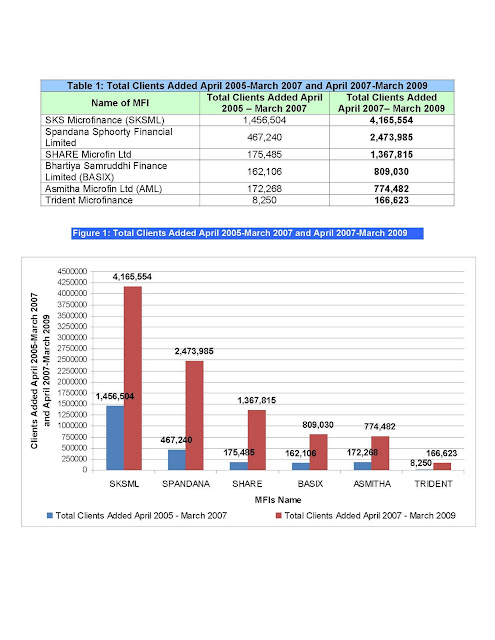 To summarise, three aspects become clear from the above discussions:
a) Much of the current crisis has perhaps been caused by the mindless and reckless growth of these for-profit MFIs (especially, those headquartered in AP);
b) MFIN, while well intentioned, has neither controlled (or retarded) the rapid growth of its member MFIs (especially in AP) nor has it enforced its code of conduct on the ground. Hence, we have the present AP crisis and current liquidity situation, for which an emergency fund is being sought; and
c) The present AP crisis is more likely to affect the liquidity of the smaller not-for profit and mutual benefit MFIs – as banks have almost stopped lending to them, their collections are (also) affected in AP, their cash reserves are perhaps lower than the for-profit MFIs and their ability to get investment is rather limited.
Therefore, it makes practical sense for the RBI to approve an emergency fund for easing the liquidity of the entire Indian Micro-Finance Industry (and not just for MFIN's members) and ensure its fair and objective administration - so that the real needy, small MFIs (especially, the not-for-profit and mutual benefit MFIs) are also supported through this (liquidity) crisis.
Again, to reemphasize, this is indeed a unique opportunity for RBI to take control of the crisis ridden micro-finance industry in India and restore some order...Such a step would also help the RBI build a multi-stakeholder platform towards creating a proper regulatory structure for micro-finance in India...

[i] I am not saying that MFIN is doing this at the moment but would like to pre-empt any such move in the near future
Posted by Ramesh S Arunachalam at 1:42 PM