It is Easy to Confess Today but Why Did MFIs Engage in Such (Over) Lending in the First Place?

Ramesh S Arunachalam
Rural Finance Practitioner
This morning’s Economic Times has a very nice story on the anatomy of the AP crisis. The article apportions the blame (for the present AP crisis) to various stakeholders including MFIs. I have already sent my congratulations and comments, on the well written and balanced article, to Mr Rajsekhar and I will not make the points here again.  However, I want to draw your attention to some interesting points and related quotes in the article… and the observations that I have with regard to these...
The quotes are as under and they are by the CEO of BASIX, one of the better governed and pioneering Indian MFIs:
1.    “That (following sound lending practices) is where we failed,” says Sajeev Viswanathan, CEO of Basix, an MFI. MFIs lent liberally to individuals who didn’t have a corresponding ability to repay. The mismatch had to hurt sometime, and that’s what is happening now.” (page 1)
2.    Viswanathan of Basix says MFI lending in Andhra rose from Rs 5,000-6,000 crore in 2009 to Rs 9,000 crore this year. (Page 2)
A first point is in order here. Incidentally, BASIX is the only organisation that has expressed a genuine realisation with regard to the over lending problem and none of the other top 11 MFIs have expressed any such views (as far as I am aware).
Secondly, that apart, however, the above quotes suggest that it is now confession time in the Indian micro-finance and other MFIs may follow suit. While it is easy to confess and move on, undoubtedly, there is a critical need to understand “why things happened the way they did? - only this will enable us to build safeguards and prevent such happenings in the future. Without question, there has to be some accountability in the system and MFIs need to – at least - explain why they turbo charged their growth from 2005 onwards. Please see data given in Tables 1 and 2 below, which shows the number of clients added (in millions) since 2005 for India's top 11 MFIs (as per client outreach in 2009) 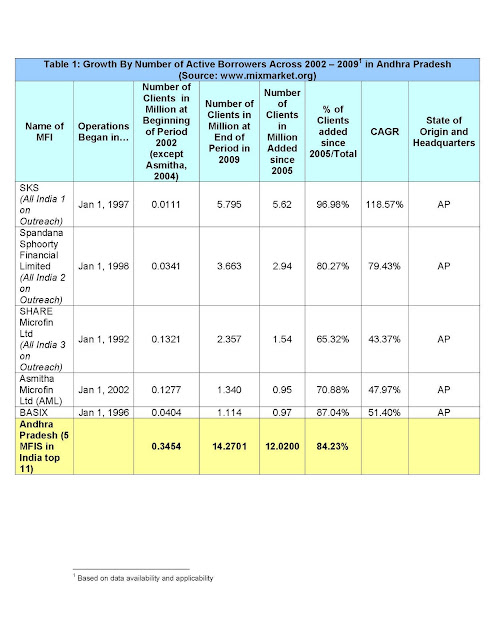 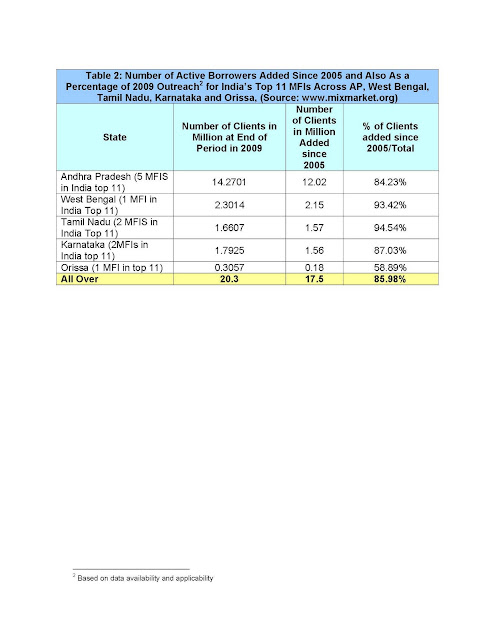 Some Key Observations from the Above Table are:
1.    There are 5 MFIs with headquarters from Andhra Pradesh in top 11 Indian MFIs (in terms of outreach)
2.      The top 3 MFIs (in terms of outreach) in India’s top 11 MFIs are all MFIs with AP headquarters. These 3 MFIs have added 10.1 million clients since 2005
3.    All 5 Andhra Pradesh MFIs in top 11 have added 12.02 million clients since 2005
4.      When you compare with other states, Andhra Pradesh’s outreach (in million) in number of clients and those added since 2005, is much greater. That is why the crisis perhaps occurred. These numbers do tell a story[i]
5.    However, irrespective of the state, most MFIs have added almost 85% of their 2009 outreach after 2005 – which shows that MFIs grew in astronomical terms after 2005
6.    A most important point is that, of the 20.3 million clients added by India’s top 11 MFIs, as much as 17.5 million were added after 2005.
7.    The states that led the growth (using data from Top 11 MFIs) were AP headquartered MFIs (12.02 Million Clients added since 2005), West Bengal headquartered MFIs (2.15 Million Clients added), Tamil Nadu Headquartered MFIs (1.57 Million Clients added), Karnataka Headquartered MFIs (1.56 Million Clients added) and Orissa Headquartered MFIs (0.18 Million Clients added). This analysis is being done for all Indian MFIs and I will post on that subsequently.
It is clear from the figures given in the tables (and the interpretations given above) that MFI growth has indeed been astronomical since 2005  and therefore, MFIs have to explain their motivations for this growth:
a)    Did MFIs grow because, the credit needs of the people (in AP and other states) suddenly increased and they genuinely wanted to meet these needs?
b)    Or was it because MFIs, out of their desire to push the frontiers of financial inclusion which in turn were pushed by policy (in good faith), wanted to enhance access for clients and enlarge their outreach?
c)    Or was it - as some critics would say - because of the urgent need for MFIs to show better operating performance (they are said to have pushed loans to clients and forcibly recovered from them) so that they could, in turn, have higher valuations (in secondary and primary markets) and get more investment and so on?
Irrespective of anything, this country needs to know the drivers of this turbo charged and supply led growth – which has again and again proven to be a recipe for DISASTER - and the institutions/stakeholders (bankers or investors or even policy makers because they perhaps drove the inclusion agenda in good faith) who supported this (disastrous) growth, in the first place. As only then can the required safeguards be built for the future.
A third issue concerns as to how MFIs grew and here we need the specifics of the processes and models by which the same top 11 MFIs added 17.5 million of their clients since 2005. This is another aspect that merits detailed analysis and understanding as only then can such UNHEALTHY (and unnatural) growth be prevented in the future...
I think the overall idea here is simple and two fold: let us evolve mechanisms to protect clients in the future (and not cause havoc in their lives) and ensure ethical and legal operations by MFIs. The above two point agenda becomes even more crucial when one considers the fact that MFIs work in an industry where clients have great vulnerability and MFIs are indeed selling a product that is perhaps the most attractive on face this planet. Therefore, it would not be difficult for MFIs to loose their way and push loans to show better results, get higher valuations, get more investments (from secondary and primary markets) and create greater wealth for themselves/stakeholders. And if this is true of the present crisis (and that needs to be determined conclusively and objectively), this would make MFIs no different from Mr Ramalinga Raju (of the erstwhile Satyam Computers) and what he tried to do. Even otherwise, I do sincerely hope that we have enough safeguards going forward to prevent this from occurring...at least in Indian micro-finance...
[i]Although the tables contain All India Data for all the MFIs, it can be argued that the MFIs with headquarters in a specific state, will have more emphasis on their home states and this is by and large true. This principle has been consistently applied. Nonetheless, the points being made are for the overall growth story and the data are quiet relevant to this
Posted by Ramesh S Arunachalam at 2:24 PM