Equity Investment and Burgeoning Growth in Indian Micro-Finance: Is There a (Causal) Relationship?

I have been trying to post on equity investments in Indian micro-finance for the last several days but have been severely hampered by lack of reliable and valid data on the same. Several people whom I approached refused to share information citing confidentiality aspects and I was left wondering that when we have had almost Rs 3000 crores (US $ 700 Million) of equity into micro-finance, we still have paucity of authoritative published data. Sometimes, I even get worried that we have no (real) idea of who EXACTLY is investing in a very sensitive sector like Micro-Finance and much of my concern relates to the norms laid down by the financial services task force set up after 9/11. Never mind and I do hope that the regulators and other industry stakeholders share my legitimate concerns…
Anyway, after a lot of struggle, I have been finally able to create a reasonably valid database (I say this because the data I have is published or quasi-published but is getting updated regularly). However, as I am still in the process of (re) validating the same, I would therefore like to caution you to view the following data and numbers accordingly… That said, it is also my belief that any further data updation (because of re-validation) will not significantly alter the trends – at best, some numbers for the respective years may increase or decrease marginally…
Having setting out the caveats, let me now proceed to share what I have found…Read on…
The following tables and graphs provide an overview of equity investments into Indian micro-finance, during the last few years: 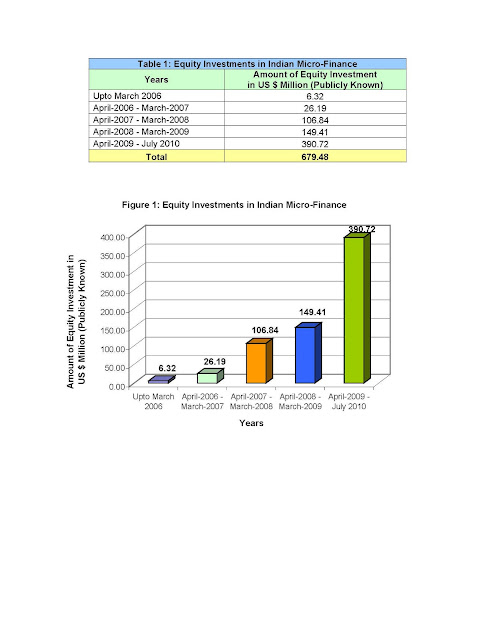 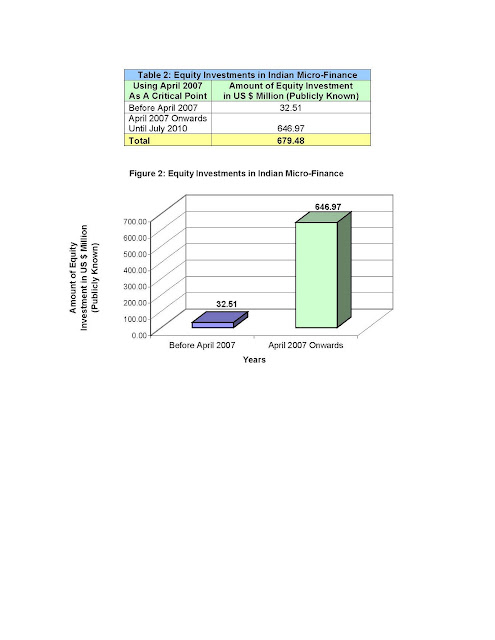 Have A Great Day at Work!

Please Note: Any help in providing authoratative data on equity investments in Indian micro-finance would be greatly appreciated! Thanks in Advance and I am continuing to (re) validate and update my database and will share that publicly when I am done.
[i] Source: The State of The Sector Report, 2010, Sage Publications.
[ii] http://indiamicrofinance.com/rbi-concerned-private-equity-funds-investing-microfinance-companies.html
[iii] I am not able to comment on growth of MFIs for 2009 – 2010 as Mix Market data is not yet available for all institutions – at least when I last checked recently.
[iv] Given that end march 2010 is not yet available for all MFIs as noted above
[v] I am looking at the Role of Commercial Banks with regard to growth of Indian micro-finance separately and will post on that in a few days time as that data has also been hard to get…
[vi]Which, according to many industry experts, are very difficult to justify in the micro-finance context
[vii] http://microfinance.cgap.org/2010/03/05/are-mfis-in-india-overvalued/
[viii] This issue is almost similar to the aspect of which came first, the Chicken or the Egg ?
Posted by Ramesh S Arunachalam at 9:33 AM