Ramesh S Arunachalam
Rural Finance Practitioner
While there have been several crisis points in India with regard to Corporate India, two crisis situations are relevant to the present Andhra Pradesh and Indian micro-finance crisis, at least from a manner in which they unfolded. We attempt a comparative analysis[i] of these three situations, which reveals that, we, in India, have learnt very little over the years…from past crisis…Read on…
I am sure you would find this comparative analysis useful and interesting… 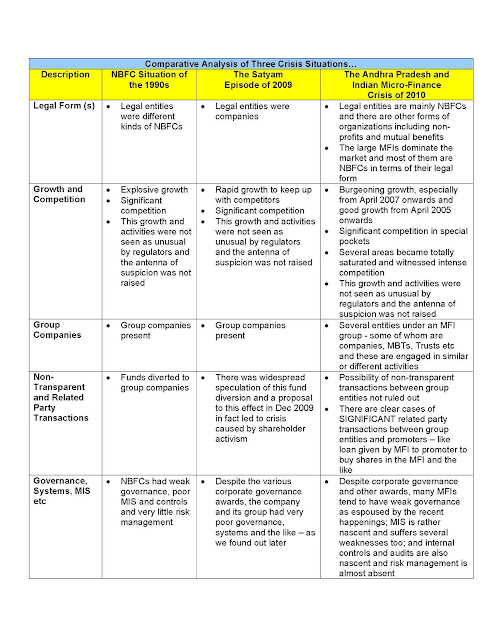 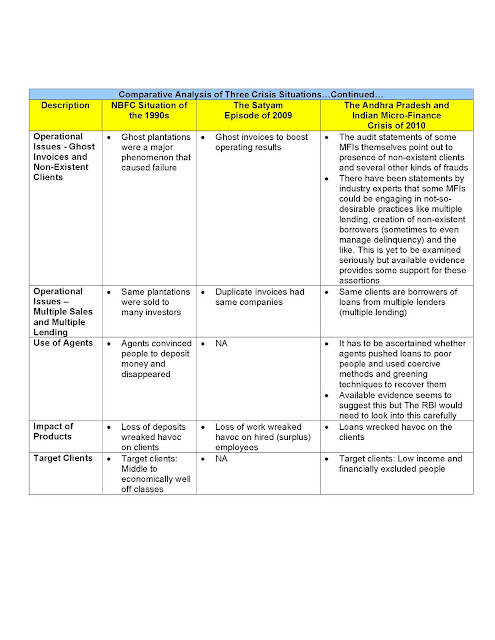 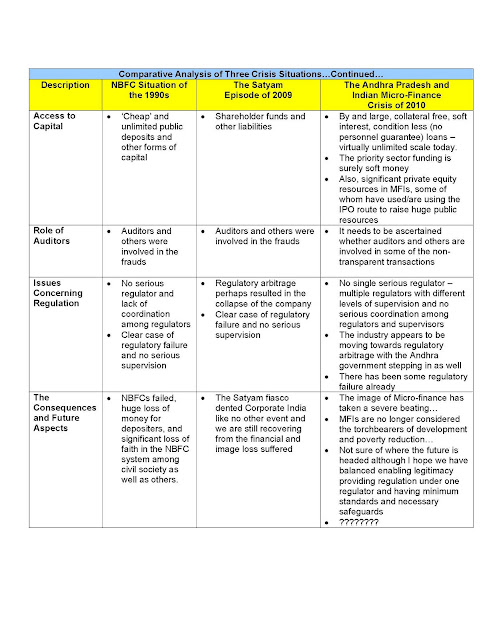 As evident from above, the comparative analysis provides some key insights given hereafter:
a)   First, every potential crisis has early warning signals, which if ignored, could snow ball the crisis into a major one
b)   Second, in almost all three cases of crisis, the companies that were involved in the crisis were once darlings and had received (corporate Governance) awards and significant (positive) media attention. Their fall from grace was however swift, post crisis
c)   Third, in almost all three cases of crisis, the companies that were involved in the crisis were purported to be doing something exceptionally innovative
d)   Fourth, in all three cases, ‘hands-off’ regulation is a common factor that aided the crisis and from this it is clear that any well-meaning regulation must have commensurate supervision that is effective on the ground. Otherwise, the ‘subjects’ of regulation (companies, MFIs etc) will claim to be complying while actually engaging in not so good practices
e)  Fifth, in all cases of the crisis, it is extraneous events that led to the crisis erupting and getting large scale public attention and it is only after this did regulators come in. Thus, all these three crisis situations symbolize regulatory failure[ii] to some extent. Interestingly, as a response, in one case, regulation became high handed, to the point of crippling the operations, post crisis – representing a complete extreme swing of the pendulum
f)   Sixth, another clear message from two crisis situations is that ‘self-regulation’ is not a worthwhile alternative and could lead to the crisis deepening further, as the concerned stakeholders rarely have incentives to comply, and
g)  Seventh, when ever you have multiple regulators, there is confusion and chaos on the ground and important aspects are not properly regulated – like Corporate Governance for Private Limited Companies and/or NBFCs, where circulars exist but have not been fully promulgated, thereby enabling the subjects of regulation to engage in not-so-good practices. The issue of related party transactions for NBFCs is a case in point.
I sincerely hope that the RBI sub-committee which is looking into the current micro-finance crisis and the Planning Commission, which is drafting an approach paper to micro-finance for the next plan period, do look into these past crisis situations and learn from these…That is the least that we could all take home, especially given that these different crisis situations have undoubtedly caused serious (notional as well as real) losses to us as a nation. And let us not waste the unfolding crisis after all!
[i] To set the record straight, no offence is meant to anyone including regulators/MFIs/Companies/Other stakeholders and I am merely doing this analysis so that we analyse, learn and take sufficient precautions…for the future. I recognise the hard task of regulation in a country like India and do sincerely appreciate the hard work done by the regulators but there is a critical need to learn lessons from the past in an objective manner and that exactly is what I am trying to do.
[ii] Same as above
Posted by Ramesh S Arunachalam at 10:04 AM