Should Indian MFIs Have Access to Priority Sector Funds? 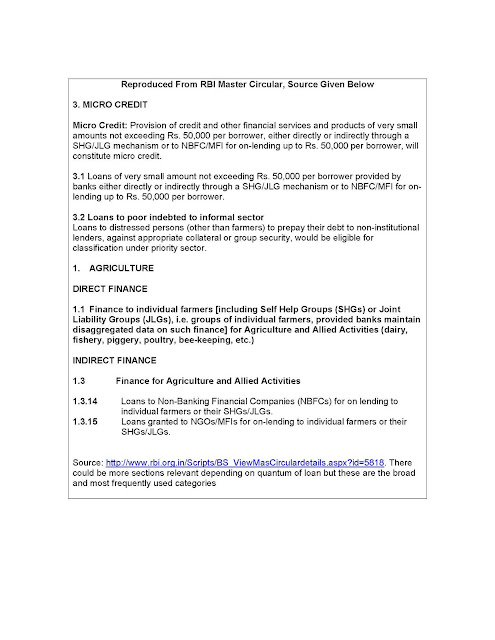 After the Andhra Pradesh crisis, it is very tempting to argue that MFIs should not gain access to priority sector funds. Without question, it is perhaps true that the availability of abundant (and non supervised) priority sector financing helped MFIs to grow in an unhealthy and inorganic manner and there by resulted in higher levels of indebtedness among the target groups.
However, making MFIs ineligible for priority sector financing (even under these circumstances) seems to be an easy way out - one that will incentivise banks and financial institutions to further lend the savings of the poor to the corporates and others. Therefore, I am very clear that priority sector financing for MFIs must stay – in other words, MFIs must continue to have access to priority sector lending (PSL) funds, subject to certain conditions enumerated below. Also, these PSL funds need to be properly monitored and supervised by the regulators and other entities like banks involved. In my opinion, the lack of sufficient supervision and monitoring[vii] is as much a cause for the present micro-finance crisis as other critical factors and I will post separately on issues related to supervision and monitoring of priority sector funds
Therefore, knocking off MFIs from the priority sector list is inappropriate as it will permanently shut the formal financial services door to low income people and in fact, push them further into the hands of the informal financiers (broadly defined)…That said, we also need to ask the question as to why was priority sector lending established in the first place. Quotations from voluminous reports apart, priority sector financing was established to ensure flow of funds from formal institutions (mainly banks) to people and sectors who did not have access to these funds. And priority sector must continue to do that and more…as suggested below

Some Suggested Proposals:  Here are some initial proposals towards that…and much of the detailing would need to be done…

First, under the micro-credit category[viii], priority sector must continue to provide access to basic consumption credit, but subject to a ceiling. The current upper limit of Rs 50,000 per client does not seem appropriate – in the light of the recent experiences, it may be appropriate for RBI to set a limit to consumption credit thorough priority sector and I would be inclined to fix it at Rs 25,000 per client – Rs 15,000 for consumption purposes and Rs 10,000 for emergency purposes.

Second, under the same category, it must continue to provide access to basic (small) production and livelihood credit, subject to the existing limit of Rs 50,000 and this must be verifiable (if required) – both for purpose as well as end user. This limit could be in addition to existing consumption loan limit, but loans must made on a case by case basis, after judging loan absorption capacity of clients. And the sum total of all loans (consumption and livelihood) should not exceed Rs 50,000 at any point in time.
Third, provisions for larger and specialized livelihood credit, perhaps exist under the agriculture finance (direct and indirect) section of the priority sector and this can be continued but again verifiability and other aspects articulated below are critical
Thus, to summarise, priority sector funds could be used to incentivise the micro-finance industry as follows: 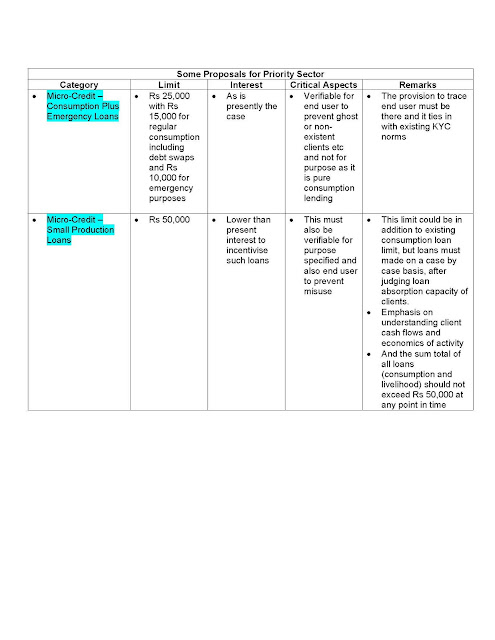 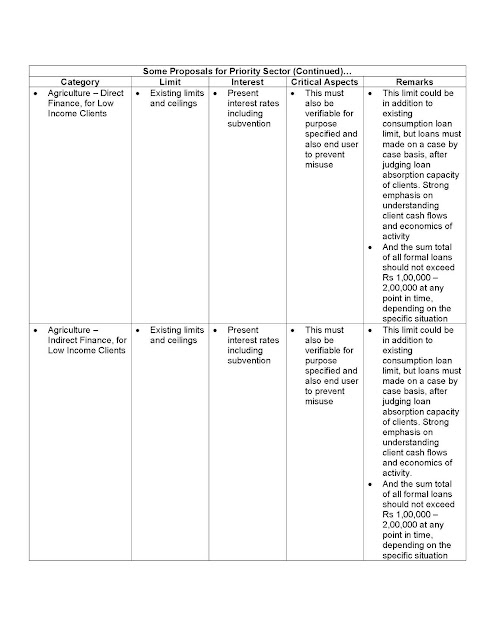 Additionally, the above priority sector funds could be accessible to all MFIs (not-for-profit, mutual benefit and for profit), subject to their meeting some (enforceable) minimum standards with regard to certain non-negotiables – governance and related issues, systems (HR, Portfolio Management, MIS, Finance and Accounting, Internal Audits, Internal Controls etc), client protection/literacy and other aspects (as may be required from time to time). Relatively small and nascent MFIs could have voluntary minimum standards to comply with and the real evaluations for gaining access to priority sector funds could be applied to growing and mature institutions, irrespective of legal form.
The RBI and the Malegam committee would need to devise a method for operationalising the above and it could be a third party audit/rating (without any conflict of interest) or other appropriate mechanisms including due diligence by the lenders forum or bankers association. It would have to be a yearly exercise, at the least and should not be cumbersome given that the number of growing and large MFIs are still few in number.
A final aspect where priority sector could be used to incentivise the flow of funds are the underserved areas and backward districts in India. Special recognition of MFIs that operate in such areas could be another instrument in the overall evaluation of MFIs suggested above…
These are just some initial thoughts and I will post again on the aspect of supervision of priority sector funds as well as the evaluation of MFIs suggested above…I really hope that RBI and the Malegam Committee do not take the easy way out and knock off MFIs from the priority sector list. That would be a huge disservice to the poor and low income people of India…
[i] http://www.rbi.org.in/Scripts/BS_ViewMasCirculardetails.aspx?id=5818. There could be more sections relevant depending on quantum of loan but these are the broad and most frequently used categories
[ii] By and large, in many cases that I have seen, the no frills accounts remain dormant and are rarely used.
[iii] While innovative MFIs/FFIs have tried to delivered such services to select clients, the larger and wider penetration of these services is still quite minimal.
[iv] I say primarily because there could be other categories used by banks under priority sector
[v] I have refrained from getting to issues related to origin of priority sector – the word first came to be used in the Indian Parliament by Former Prime Minister and Late Shri Morarji Desai in 1967, who was answering a question relating to investment in certain sectors
[vi] http://www.rbi.org.in/Scripts/BS_ViewMasCirculardetails.aspx?id=5818. There could be more sections relevant depending on quantum of loan but these are the broad and most frequently used categories
[vii] Again, this is an honest observation and my intention is not to find fault with any one. Rather, I think we must all objectively look at existing weaknesses and strengthen supervision/monitoring of priority sector funds
[viii] Micro Credit: Provision of credit and other financial services and products of very small amounts not exceeding Rs. 50,000 per borrower, either directly or indirectly through a SHG/JLG mechanism or to NBFC/MFI for on-lending up to Rs. 50,000 per borrower, will constitute micro credit.
Posted by Ramesh S Arunachalam at 10:52 AM