Growth of Securitisation, Equity Investments and Priority Sector Lending in Indian Micro-Finance: Was Dr Y V Reddy Right After All?

Ramesh S Arunachalam
Rural Finance Practitioner
In the last few posts, I have been talking about how fast MFIs have grown during the last few years, especially, during the period April 2007 – March 2009. I also started looking at where they got their resources and made a few posts on equity investments into Indian micro-finance, which have certainly burgeoned during the last few years.  The sources of funding for MFIs to grow is perhaps best summarised by Mr N Srinivasan, in The State of The Sector Report (2010), where he argues that:
“MFIs ramped up their loan portfolio in India from US$ 252 million to US$ 3.8 billion between 2005 and 2010. The funding for this expansion came from several sources apart from equity funding. Bulk loans from banks are the most important source of funds. In recent years, quasi-equity, mezzanine funding, non-convertible debentures, debt assignments and sale of securitized debt have all emerged as other means of raising resources.”[i]
When I read the above paragraph in the State of The Sector (2010) report and especially, saw the word securitisation, my alarm bells started ringing for I could, innocently, relate to Dr Y V Reddy’s recent statement in the economic times:
And according to Dr Y V Reddy, ‘the former Reserve Bank of India governor - credited with saving the nation’s financial system from the 2008 meltdown - microfinance is India’s subprime.’ “Ultimately, its something like subprime lending,” Mr Reddy told Economic Times in an interview ahead of his book release. “The same incentives are operating here... it was securitisation and derivatives that operated in the US. Here it is the priority sector lending by banks.”[ii]
While there has been a lot written about securitisation in micro-finance, the State of The Sector (2010) report provides a nice overview:
“Micro-loan securitization provides banks a profitable way to increase their investment in the microfinance sector through rated and tradable securities. 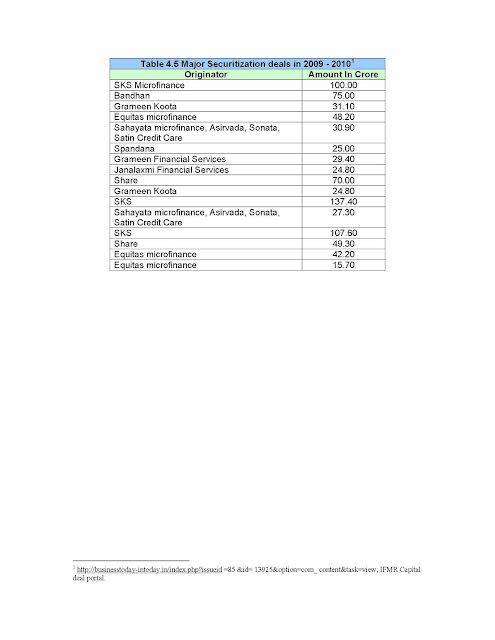 The securitization process, which allows MFIs to pool the receivables from loans and sell the same to third parties like banks, mutual funds and insurance companies, could perhaps be another big opportunity for MFIs to increase their funding sources. IFMR Capital, a Chennai based NBFC expects more than Rs. 1000 crore worth of securitization transactions to take place in the Indian micro finance sector for the financial year 2010-2011.[iii] Securitization enables lower costs to originating MFIs, quality assets to buyers, and a means of participation for insurance companies, mutual funds and potentially even pension funds.“[iv]
However, not all analysts are euphoric about securatisation…and perhaps rightly so…As Kothari and Rozas (2010)[v] note, in an excellent article, “It is necessary to rectify and discipline present practices in securitization, but even when that is accomplished, the strong tie between an MFI and its portfolio remains a serious conundrum for securitizations, which after all depend on breaking that very tie through true sale.”
While Kothari and Rozas (2010) talk about the aspect of what Professor Oliver Williamson and/or Ronald Coase would call as an idiosyncratic relationship with significant asset specificity, a related issue is brought up by Chanana[vi] (2009) who notes that...”Securitization creates a moral hazard that adversely affects the screening incentives of lenders.’ In the MFI world this means that if MFIs do not own the risk of a loan, they are less likely to screen potential creditors properly. The result is likely to be an increase in default rates. This is not all, though. If the subprime crises was caused partly by moral hazard, the impact of that hazard was magnified by the availability of cheap and plentiful credit. Banks vastly increased credit availability to subprime creditors simply because money was cheap and easy to be had. This reduced any remaining incentive on the part of lenders to conduct proper due diligence. “
And a close look at the above paragraph suggests that a similar situation perhaps existed in the Indian micro-finance industry (and in AP) before the AP government passed its ordinance[vii]…Read on…
Equity investments[viii], were available in plenty, until then… 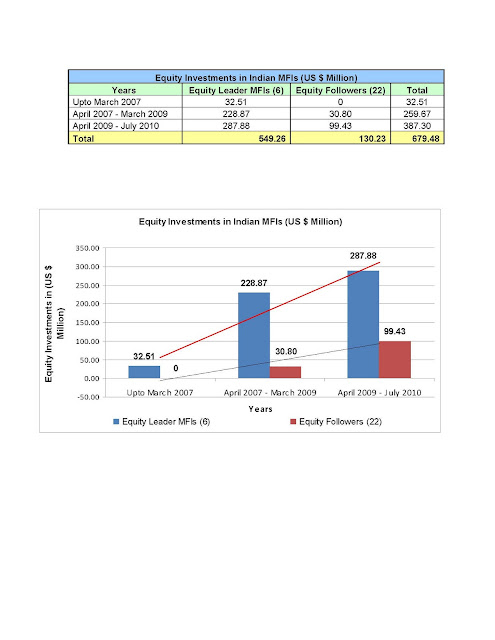 Clearly, it is perhaps more than mere coincidence that equity investments into Indian micro-finance almost burgeoned at almost the same time (or a little after) when MFIs grew at their fastest pace...
That said, the buoyancy of equity investors, is perhaps best matched by bank credit...this is best exemplified by the following quote...
“Bank loans to MFIs did not exhibit any overt signs of increased risk perceptions towards the microfinance sector. The total loans extended to MFIs and outstanding at the end of March 2010 is estimated at Rs.15085 crore.[ix] Public sector banks have taken to MFI financing in a big way. Public sector banks (not including SIDBI) had an exposure of Rs. 4737 crore to MFIs in comparison to private sector banks' exposure of Rs. 4133 crore. Foreign banks had outstanding loans of Rs.1994 crore and FWWB had increased its exposure from Rs. 295 crore last year to Rs. 360 crore. SIDBI almost doubled its exposure to Rs. 3808 crores during the year. At this level SIDBI had a share of more than 25 per cent of the market.”[x]
Thus, looking at the above, it is clearly Déjà vu...at least as far as Indian micro-finance is concerned...With equity investors and bankers (as noted above) vying with each other to provide financial resources (through innovative deals and instruments) to the Indian MFIs...who, in turn, grew at a scorching pace with priority sector bank loans, equity investments and other innovative mechanisms like securitization...growth that showed strong signs of being achieved through multiple lending and not-so ethical lending and recovery practices...all the while enhancing the indebtedness... of the low income people...all of which made the parallels with the sub-prime situtaion perhaps rather strong…
When I think of the above, I shudder sometimes, asking the question, was (and is) Dr Y V Reddy, the man who protected and insulated India from the global financial crisis, perhaps right? I say “WAS” because Andhra Pradesh micro-finance as we knew it is now history…I say “IS” because of the time bomb that is silently ticking away in other parts of India where similar mindless growth fuelled by innovative funding mechanisms and questionable lending and recovery practices are still in vogue…
I leave it to you to judge for yourself…
Have a nice day!
[i]  N Srinivasan, The State of The Sector Report, 2010, Sage Publications
[ii] http://economictimes.indiatimes.com/news/economy/indicators/Microfinance-in-India-is-like-subprime-lending-Y-V-Reddy/articleshow/6972903.cms
[iii] http://indiamicrofinance.com/ifmr-capital-targets-rs-1000-cr-securitisation-deals-current-financial-year.html
[iv] N Srinivasan, The State of The Sector Report, 2010, Sage Publications
[v] http://www.microfinancefocus.com/news/2010/07/06/the-hidden-risks-behind-microfinance-securitization/
[vi] http://www.planetd.org/2009/03/18/securitizing-microfinance-bad-idea/
[vii] I personally feel that regulating micro-finance is the job of the financial regulator – i.e., the RBI. From that perspective, I am of the opinion that the AP ordinance and bill are not at all appropriate although I feel that states have some constitutional duty and space to protect their citizens from excesses of any kind…
[viii] Subject to caveats mentioned in earlier posts
[ix] Based on provisional data made available by NABARD and further information collected by the author individually from some banks.
[x] [x] N Srinivasan, The State of The Sector Report, 2010, Sage Publications
Posted by Ramesh S Arunachalam at 8:49 AM