Growth of Active Borrowers in Equity Leader MFIs: Some Data From The Indian Micro-Finance Industry and Critical Issues for Further Analysis…

Ramesh S Arunachalam
Rural Finance Practitioner
Two days ago, I posted on the relationship between equity and growth in Indian micro-finance, using data on gross loan portfolio and examining the changes there in. In this post, I look at the same issue from the aspect of number of active borrowers and the associated changes for two reference periods: a) April 2005 – March 2007; and b) April 2007 – March 2009. As in the earlier post, I limit my discussion to the 6 equity leader MFIs who were favorites for equity investors and I will look at other MFIs in subsequent posts. The following figure provides an estimate of equity investments into 6 equity leader MFIs in Indian micro-finance, subject to the caveats[i] made in the earlier posts 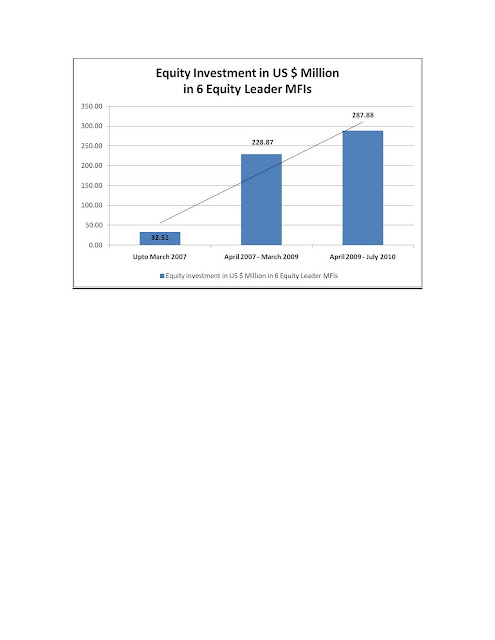 Please note that the above data relates to the 6 Equity Leader MFIs[ii] and apart from the investments of US $ 549.26 received by these MFIs, other MFIs received equity investments worth US $ 130.22 million, which are being analysed separately…Honestly speaking, as evident from figure above, the 24 month period from April 2007 – March 2009 is really a watershed for equity investments into Indian micro-finance as “serious” equity first came in then. Of course, the taste of success[iii] - in whatever terms they are defined including stupendous growth of gross loan portfolio (GLP) of MFIs, number of active clients, profits etc - during this period has perhaps prompted more equity investments into Indian MFIs during the next 16 months. But, the real icing on the cake was July 2010 IPO, which was a significant achievement by any standards. Not to forget the subsequent listing at a huge premium – again, something very remarkable.
That said, let us continue to look at what operationally happened at these MFIs during the two reference periods for them to attract this kind of equity and please recall the earlier post which dealt with the growth of gross loan portfolio across the two reference periods. Here, we focus on growth in number of active borrowers across the two reference periods:
A) April 2007 – March 2009:
1.      The 6 Equity Leader MFIs grew at a CAGR (over a 4 year period) of 61.19%, adding 12.91 million active borrowers during the period April 2005 to March 2009.
2.      Of this, nearly 10.46 million active borrowers (or 81.03% of the total additional active borrowers covered from April 2005 – March 2009) were added during the period of April 2007 – March 2009.
3.      This is equivalent to the 6 MFIs adding 0.44 million active borrowers (or 4, 35,971 active borrowers) every month, during the 24 month period.
4.      Equivalent to each MFI adding 0.072 million clients (or 72661 active borrowers) every month, which is certainly a lot of active borrowers!
5.      The above number translates to about 2389 new clients (or about 479 new JLGs or 69 new centres) to be added every day by EVERY MFI and that is a huge ask, under any circumstances…
Ask some one who has worked at the grass-roots level and you will surely understand that sourcing clients and developing JLGs (Joint Liability Groups) and Associated Centres’ does take a lot of time…and that is why I would rate the above as very, very rapid growth...by any standards…
If you combine data from the previous post, this means that the average loan balance per active borrower added during the period April 2007 – March 2009 is about US $ 208.30 and double the size of the previous period (beginning, i.e., April 1st 2005) active borrower average loan balance, which was just US $ 101.82.
The implications of this are significant: while the concerned MFIs appear to have increased their active borrowers and given them loans to enhance their gross loan portfolio, the point to be noted is that they have enhanced their portfolio by perhaps giving them much larger loans. It is as a result of this that the average loan balance per active borrower has almost doubled for the new active borrowers added… 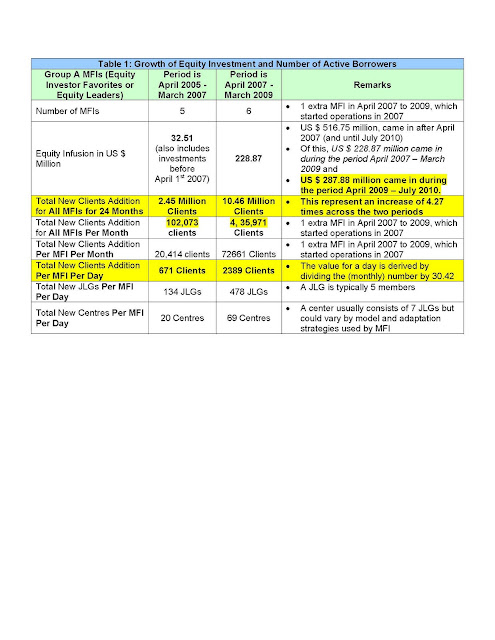 The broad picture from the above table is as follows:
·         The number of new clients, new JLGs and new centers added every day by each MFI during the period April 2007 – March 2009 is huge, by any standards
·         The number of clients, JLGs and Centres[iv] added by these MFIs during the period, April 2007 to March 2009 is almost 3.559 times the number of clients, JLG and Centres added in the previous period of April 2005 to March 2007. This is very significant growth. Please note that as posted earlier, the gross loan portfolio of these MFIs also grew at very significant rates during the period, April 2007 to March 2009– almost 4 times the previous period (April 2005 – March 2007) gross loan portfolio
·         And of course, as noted in the earlier post, these Equity Leader MFIs received significant equity infusion during the period April 2007 – March 2009 (US $ 228.87 million) and also thereafter during the period, April 2009 – July 2010 (US $ 287.88 million).
D) Critical Issues and Implications:
It would be useful if the Indian micro-finance industry, the MFI associations, RBI Sub-Committee and other stakeholders try to understand the rationale behind the equity investments and associated growth numbers (in terms of active clients as well as gross loan portfolio) and the relevant processes. Some of the key issues are highlighted below:
·         Short Cuts in Client Acquisition Processes?: First, it would be interesting to see whether the normal and established processes of client acquisition were altered by MFIs because of the urgency to grow fast - the key questions being whether short cuts were adopted to facilitate fast growth and what the impact did this have on client preparation, which, until then had been considered so fundamental for success of micro-finance.
·         Use of Agents for Client Acquisition and Other Processes?: Second, it would also be worthwhile to examine whether outsourcing and use of agents for client acquisition and other processes (like repayment collection) became an established strategy during this period and what impact this had on borrower sensitization/preparation as well as their well being
·         Reasons for Rapid Growth Right After Krishna Crisis?: Third, it would be useful to understand the reasons for the very rapid growth during the period April 2007 – March 2009, especially as it came in the backdrop of the Krishna crisis (of 2005/6). This becomes even more significant given the fact that 5 of these MFIs are headquartered in Andhra Pradesh and some of them are supposed to have provided letters and commitments to the then Andhra Pradesh government - post Krishna crisis - with regard to (not pursuing) multiple lending, (not using) coercive repayment, growth strategy and other aspects/practices…
·         Which Stakeholders Drove Such Rapid Growth?: Fourth, it seems necessary also to understand who (in terms of stakeholders) drove this growth and why they did so? Two specific aspects could be examined here: a) Whether equity investors looking for quicker returns led the MFIs to grow very faster?; and/or b) Did the MFI promoters/senior management, - who were perhaps looking for more investments and better valuations -  themselves turbo charged the growth? It would also be useful to examine the role of commercial banks and DFIs as well as policy in influencing the pace of growth and I hope to be posting separately on the role of commercial banks (in influencing the pace of growth) soon
·         What Impact Did Rapid Growth Have on MFI Systems (With Special Focus on Frauds)?: Fifth, without question, the per MFI per month (and per day) increase in new clients across these two periods is very significant and it would be interesting to see whether and how the systems of these MFIs coped with this rapid growth – I have already posted on issues of non-existent clients, repayment frauds and others aspects of staff frauds (based on an analysis of some MFI financial statements) and it would be useful to examine this closely again, and
·         What Impact Did Rapid Growth Have on MFI Human Resource (HR) Practices: Last but not the least, it would also be important to look at what this burgeoning growth did to the employees and staff at the field level – in terms of working and living conditions, their case load (which I am analyzing), their morale, their mental stress/health and the like. Available initial evidence seems to suggest that the already weak HR practices in MFIs (in 2005) perhaps got weaker during this period of burgeoning growth in April 2007 – March 2009…this needs to be understood in a transparent and objective manner…
Have a nice day and my next post would be on the role of banks in this growth!
[i] After a lot of struggle, I have been finally able to create a reasonably valid database (I say this because the data I have is published or quasi-published but is getting updated regularly) on equity investments in Indian micro-finance. However, as I am still in the process of (re) validating the same, I would therefore like to caution you to view the data and numbers accordingly… That said, it is also my belief that any further data updation (because of re-validation) will not significantly alter the trends – at best, some numbers for the respective years may increase or decrease …
[ii] The 6 Equity Leader MFIs have received a major share of the equity investment, which roughly totals US $ 549.26 million and this represents about 80.83% of total estimated equity inflows into Indian micro-finance. This is a significant percentage by any standards…
[iii] No sarcasm is implied or intended. This is a genuine statement!
[iv] The MFIs could be using different terms and a different structure of client aggregation. The idea of using JLGs and centres was to illustrate the real growth of clients, JLG and centres (where they are applicable) and notional growth of JLG/Centres, where they are not applicable.
Posted by Ramesh S Arunachalam at 9:06 AM