Ramesh S Arunachalam
Rural Finance Practitioner
A very interesting event is happening in Washington D C on Thursday, the 9th of December 2010. The Event - The Global Implications of India’s Microcredit Crisis - features a very distinguished group of people including: David Roodman, Senior Fellow, Center for Global Development; Stephen Rasmussen Technology Program Manager, CGAP, World Bank; Swaminathan Aiyar, Consulting Editor, Economic Times, Contributor, Times of India and Research Fellow, Cato Institute; Liliana Rojas-Suarez, Senior Fellow, Center for Global Development; and Beth Rhyne, Managing Director, Center for Financial Inclusion, ACCION International. It will be moderated by Lawrence MacDonald, Vice President of Communications & Outreach, Center for Global Development. A brief write up for the event notes …
“The largest crisis in the history of microfinance is now unfolding in India. After five years of growth so fast it has been described as “indescribable,” and after a lucrative initial public offering (IPO) by the leading firm, the government of the state of Andhra Pradesh has cracked down. Amid reports of microcredit-linked suicides, the state has urged borrowers to stop repaying, and millions have heeded the call. Bankruptcies of some of the world’s largest microcreditors are now a realistic possibility.
What is the reality of microcredit in India? Is the backlash an engineered campaign to protect a government-run (and World Bank–financed) program from private-sector competition? Or has the fast growth in credit ensnared the poor in debt? Some of each?
And what lessons does the crisis hold for actors worldwide, including microfinance institutions and investors ranging from the World Bank to Kiva users? When is microcredit—and investment in it—too much of a good thing?”
In this post, I look at available[i] data from the Mix Market (www.mixmarket.org) and try and provide a brief analysis of whether indeed there was fast growth in credit in Andhra Pradesh as argued above. I hope my post will also provide some data and key trends for the speakers at tomorrow’s interesting forum and thereby enable them to get a (better) feel for the ground level reality…in terms of what has happened in Andhra Pradesh…during the last 5/6 years…I also raise some questions that I hope will catch the attention of the various speakers at the event and other stakeholders including regulators in India…I only wish that I were there at the event and good luck to everyone speaking at the event…It promises to be a great event…
Just a point of clarification…While I have previously looked at the growth in terms of number of active borrowers earlier, I now do so also using the measure of Gross Loan Portfolio (in US $) and the some interesting trends are available. Read on… 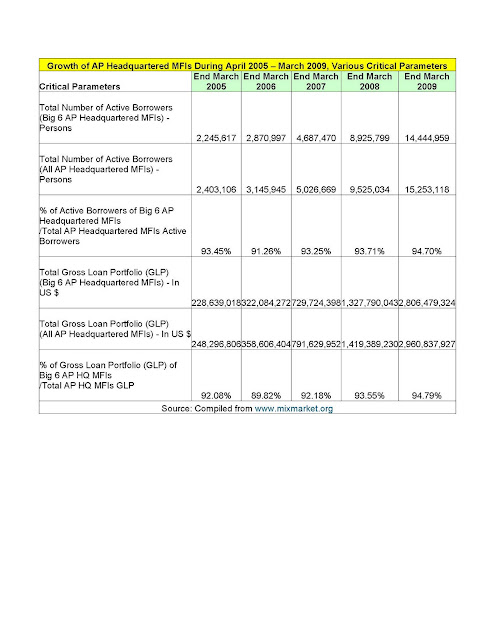 [i] In my opinion, the best available PUBLISHED data on MFIs in India and elsewhere is Mix Market as it is (internally) consistent and seems reliable/valid. Although, I would have preferred completely disaggregated data (State wise and District wise) for all MFIs, I have had to use surrogates to make my analysis. Nonetheless, I very much appreciate the fact that we at least have a data set like the one at Mix Market. My sincere thanks to them
[ii] It is presumed and perhaps correctly that AP headquartered MFIS will have their largest concentration in their home state and the same analogy is consistently applied for other state headquartered MFIs. This seems fine from the overall perspective of understanding growth of MFIs.
Posted by Ramesh S Arunachalam at 9:23 AM