Growth of Equity Investments and Gross Loan Portfolio: Some Initial Data From The Indian Micro-Finance Market… 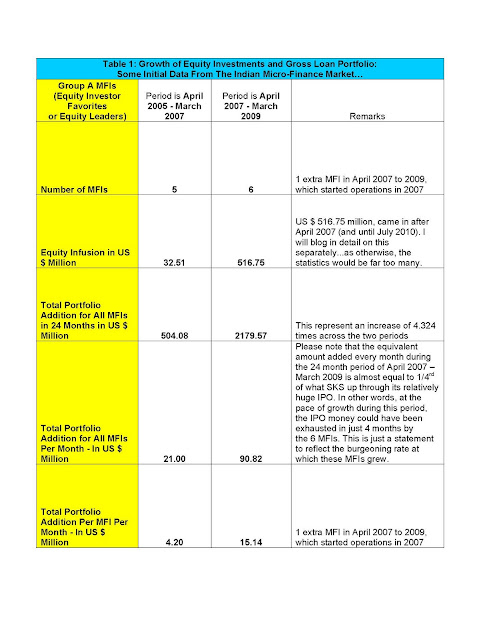 What’s is the story conveyed by the numbers?
ð      These Equity Leader MFIs received significant equity infusion during the period April 2007 – March 2009 and also thereafter
ð      Their gross loan portfolio grew at very significant rates – almost 4 times the previous period (April 2005 – March 2007) gross loan portfolio – during the period, April 2007 – March 2009
Key Questions for Learning:
It would be useful if the RBI Sub-Committee and other stakeholders try to understand the rationale behind these:
ð      What drove this very rapid growth during the period April 2007 – March 2009, especially as it came in the backdrop of the Krishna crisis (of 2005/6) and especially, given the fact that 5 of these MFIs are headquartered in Andhra Pradesh?
ð      Did equity investors drive this growth? Or did the MFI promoters, who were perhaps looking for more investments (in the wake of banks having developed cold feet after the Krishna crisis) and better valuations, do so?
ð      Without question, the per MFI per month increase in Gross Loan Portfolio across these two periods is very significant and it would be interesting to see whether and how the systems of these MFIs coped with this rapid growth?
Answering the above questions would also answer the a key question posed by David Roodman in the recent Washington event on Indian Micro-Finance– i.e., the relationship between MFI growth, equity investment and related aspects.
Have a good weekend and nice day and feedback/comments[iv] welcome!
[i] After a lot of struggle, I have been finally able to create a reasonably valid database (I say this because the data I have is published or quasi-published but is getting updated regularly) on equity investments in Indian micro-finance. However, as I am still in the process of (re) validating the same, I would therefore like to caution you to view the data and numbers accordingly… That said, it is also my belief that any further data updation (because of re-validation) will not significantly alter the trends – at best, some numbers for the respective years may increase or decrease …
[ii] Not the same as the BIG 6 AP Headquartered MFIs referred to in the earlier posts. For reasons of confidentiality, I have withheld names of MFIs, at the request of people supplying the data
[iii] Used a dollar reference rate of Rs 46 per Dollar, which seems a good ball park exchange rate figure.
[iv] Please note that anonymous COMMENTS will not be published. Thanks!
Posted by Ramesh S Arunachalam at 10:32 AM